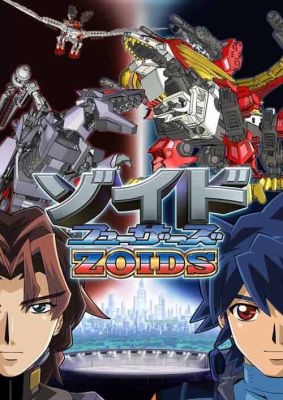 R.D. is a delivery boy who works for a company called Mach Storm in order to earn money to search for the legendary Alpha Zoid. A Zoid that he heard rumors about from his dad that he passionately believes in. Mach Storm also doubles as a Zoid Battling team. In R.D.`s first Coliseum Zoid Battle, he encounters a team that can fuse Zoids. R.D. soon discovers that he has a Zoid that can compatably fuse with his Zoid, Liger Zero. After this happens R.D.`s adventure to discover the truth about the Alpha Zoid begins. Source: ANN Note: The series is 26 episodes long, however, the show had an unsuccessful U.S. broadcast (1 year ahead of Japanese broadcast), that was eventually canceled after 13 episodes. The English dub got a complete run in Australia. Similar to Transformers: Armada, the show was first broadcast in the U.S. instead of Japan (also, the Japanese version contained improvements added to the episodes over the time between releases).