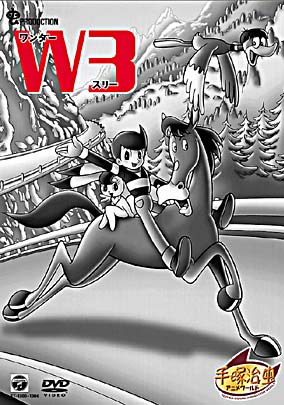 This was the first original TV produced by Mushi Production, and all animation staff participated in developing characters and story. Although the work later appeared serially as a Manga, it was originally planned as an animated programme. The three spacemen who are transformed into a rabbit, a horse, and a duck --- Bokko, Bukko and Nokko --- watch over the activities of a boy named Hoshi Shinichi and his elder brother Hoshi Koichi, who is a member of a group of secret agents that the Phoenix involves in the protection of the earth. The three come to the earth to decide whether to ruin or protect the planet. This is the first Japan-made made-for-TV animated program in which the Disney style was adopted --- that is, to appoint a specific animation illustrator for each specific character. The work was broadcast in the U.S. under the title "The Amazing 3."