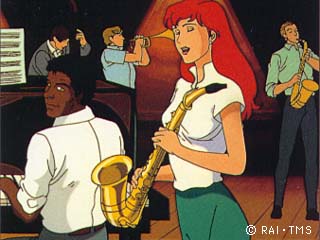 The intelligent Antoinette, known to her friends as Tony, moves to Paris where she takes a job as a reporter for the newspaper ""La Voix de Paris." Together with the photographer Alain and the artist Bricolage she solves unsolved crimes and often crosses the path of the crook Madame Lapin.

The Japanese version is incredibly rare. As far as I'm aware, it only aired on NHK BS-2, a Japanese satellite TV channel, in the early 1990s, and I'm not even sure if they only aired episodes 1-26 or also episode 27-52 (though TV guide from archived newspapers might give us more info?). I'm not aware of any Japanese language home video releases or web streams of any sort. I only have a TV rip of episode 23 in Japanese, that cuts off during the ending song. Don't expect more episodes from the same source, especially earlier episodes, as that being recorded was probably by sheer chance.

Italian version disappeared too. RAI archived at least 22 episodes, released on official streaming like fifteen years ago, currently lost since they changed streaming platform multiple times. Their recent official Sherlock Hound half-release has no dual audio, I highly doubt they ever keep it.

Childhood treasure n.6, would watch it again. Common only in Spanish.