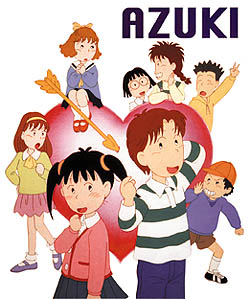 Noyama Azusa, a 5th grade girl with dark hair in pretty pigtails, is called Azuki-chan, meaning red bean because she was called Azuki wrongly when she was a 1st grader. She didn`t like the nickname very much until, one day, a transfer student called Yuunosuke-kun came to the class. When Azuki was teased by a boy called Ken-chan about her nickname, Yuunosuke passed by and she became the first girl in the class whose name was memorized by Yuunosuke! She fell in love with him and thought, "It`s so nice to have such a unique nickname." Source: AnimeNfo