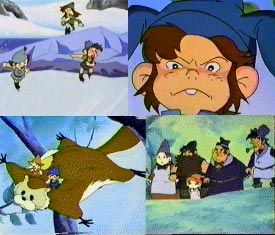 The story of two friends (Belfi and Lillibit) who live in the Dwarf village deep in the forest with their friends. Belfi (Lillabit in the English version) lives with her uncle who is the doctor in the village. She spends her time with her friends, especially her best friend Lillibit (Willibit in the English version), and Napoleon (Snagglebit in the English version), the spoiled son of the village mayor. Other characters include Chuchuna (Teenybit), Lillibit`s younger sister; Manga (Snuffly), Belfi`s flying squirrel companion; and Daggurin (Elderbit), the village elder. The episodes show how friends cooperate together to help the people in the village and animals in the surrounding forest who are in need. At the end of the story Belfi`s parents, assumed dead for the entire series up to that point, come back to the village.