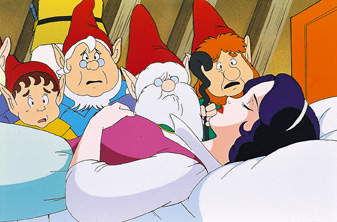 Shortly after the death of his wife, King Conrad decided to remarry for the sake of his only child the beautiful Snow White. Lady Chrystel, his second wife, was a wicked woman however. Left to lead the kingdom during her husband`s absence, she rapidly proved her egoism, cruelty, and vanity. Neglected and lonely, poor Snow White sought consolation in the love and affection of her three pets: a puppy, a kitten, and a white dove. Luckily, the encounter with the handsome noble, Prince Richard, did a bit to liven up the life of the young princess... that was until a sad separation was imposed on the boy, along with an unexpected and lengthy trip. Just after Richard`s departure, Lady Chrystel, with the help of a hunter, made an attempt at the girl`s life. At the end of a terrible night of wondering through the wilderness, the princess discovered a cosy little cottage in which, after having explored it, she fell asleep, exausted. The meeting with the owners of the house, seven nice and gentle dwarfs, was at first rather frightful, but ended up proving to be a truthful and enduring friendship. Source: Mondo TV