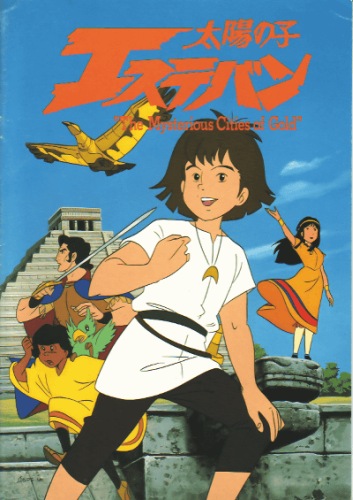 The year is 1532. Esteban, a young boy, is told that he was saved by Mendoza, a navigator on a Spanish ship from a ship wreck in a storm at sea. The only clue to his identity is a medal that Esteban wears about his neck. Esteban joins Mendoza on a trip from Spain to the new world - the Americas - where on route he meets two other children - Zia - an Inca girl and Tao, the last member of a highly advanced race. All three are looking for different things - Esteban to find his father and his identity, Zia for her father and Tao for remains of his race. The clues for all three quests however all point to the seven Cities of Gold and so the children, Mendoza, Sancho and Pedro - two other sailors and friends of Mendoza start searching in a massive treasure hunt for the Cities Of Gold...

The original Japanese version of this is lost media, except for the few episodes that are available online as TV recordings. I don't know if NHK made any efforts in collecting domestic TV recordings of this, like they did with the Marco Polo anime (which they're still collecting TV recordings for).

The Japanese DVD release has the re-recorded Japanese audio, with a mostly different voice cast.